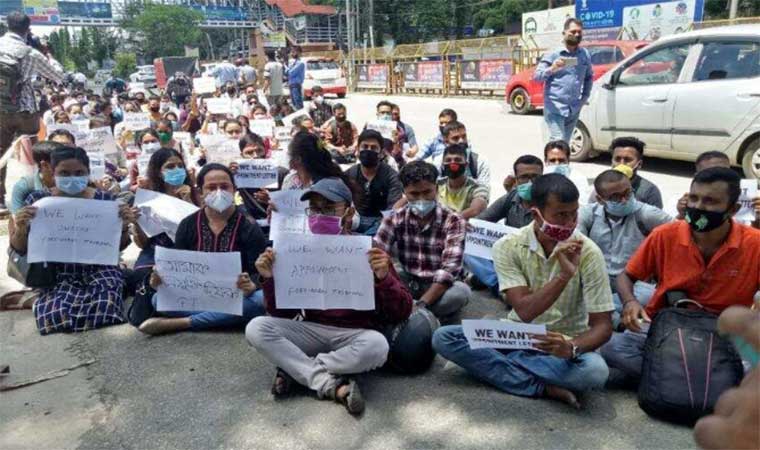 More than 19 lakh people left out of the National Register of Citizens in Assam are yet to be issued rejection slips while new Foreigners’ Tribunals to handle their cases are not functional yet.

A section of the 1,600 support staff for the new foreigners’ tribunals in Assam protesting in Guwahati seeking release of their appointment letters.(HT PHOTO)

Ending years of speculation and a gargantuan process involving thousands of personnel, the final list of Assam’s updated National Register of Citizens (NRC) was published on August 31 last year. But a year since that date, the process hasn’t moved forward much.

The 19 lakh applicants (of the total 3.30 crore) who were left out of the list, meant to identify Indian citizens and leave out suspected foreigners, have not been able to file appeals as they are yet to get rejection slips needed to do so. The state NRC office has to issue to rejection slips.

The rejection slips, which will mention reasons for exclusion of an applicant’s name, are required for those left out of the NRC to file appeals in the foreigners’ tribunals (FTs), a quasi-judicial body that decides the fate of those declared suspected foreigners.

“While issuing the rejection slips, we need to attach ‘speaking orders’ for each applicant. But several of these are not in order due to some discrepancies. All of these need to be checked before issuing the slips,” NRC state coordinator Hitesh Dev Sarma said.

“But the process is stuck as state government officials who do the checking are busy in Covid-19 duties for the past six months. We don’t know the exact number of ‘speaking orders’ which have discrepancies. During random checking, several such were detected. If these are not in order, it would lead to legal issues when the applicants file appeals,” he added.

The NRC was first prepared only for Assam in 1951 on the basis of the census conducted the same year. The process to update the 1951 list started in 2015 following directions from the Supreme Court, which acted on petitions seeking detection of illegal immigrants, especially from Bangladesh.

The updated list was to include names of all those persons (or their descendants) who appear in the 1951 NRC, or in any of the electoral rolls up to the midnight of March 24, 1971- when the liberation war for Bangladesh’s independence from Pakistan began.

Names of foreigners found residing in Assam illegally after that date, were to be excluded from the updated list.

The demand for identification of illegal immigrants, deletion of their names from voter lists and deportation started in 1979, with All Assam Students Union (AASU), spearheading a 6-year agitation. The agitation ended with signing of the Assam Accord in 1985, with March 24, 1971 as the cut-off date for entry of foreigners into the state.

It was clarified that those left out of the final NRC won’t be declared foreigners. They would have the option of filing appeals within 120 days in FTs which will decide their citizenship status based on provisions of Foreigners Act, 1946, and Foreigner (Tribunals) Order, 1964.

Publication of the NRC final list was expected to end four decades of demands for detection of illegal foreigners residing in Assam. But the list was immediately denounced by the ruling BJP in the state claiming many genuine Indians have been left out while illegal immigrants have been included.

The state government later filed a petition in Supreme Court seeking 20% re-verification of names of applicants from districts bordering Bangladesh. The plea was rejected by the apex court.

In November last year, Prateek Hajela, who was the state NRC coordinator and had overseen the entire updating process, was transferred to Madhya Pradesh following a SC order and replaced by Hitesh Dev Sarma, who went on a month’s leave immediately.

The developments in court and in the NRC office delayed the process of issuing rejection slips much earlier than the start of Covid-19 pandemic this year.

In order to hear appeals filed by those left out of NRC, the state government had last year appointed 221 members for new FTs to be set up across the state. But they are yet to become operational and appointment letters of 1,600 people selected as support staff for these tribunals have also not been issued.

“Our lives have been turned upside down due to this delay. I was the only earning member of my family, but I’ve been unemployed for 11 months now. Our recruitment was to be valid for a year. The government should clarify whether that time limit will be extended and our appointment letters issued,” she added.

These new FTs are in addition to the 100 such tribunals which are already functioning. Those declared foreigners by a FT are sent to detention centres where they are kept for deportation to Bangladesh. But that process is not feasible as India doesn’t have an extradition treaty with that country. Bangladesh has been clear that the NRC process is India’s internal matter and those left out of the list are not its citizens.

The state government says it can’t appoint the 1,600 support staff for the new FTs as the process of appeals by those left out of NRC hasn’t begun yet due to non-issuance of rejection slips.

“The additional FTs are yet to be established and the new members are still attached to existing tribunals. The FT members and support staff were recruited for the NRC purpose,” said MS Manivannan, commissioner and secretary, home and political department.

“The process is yet to start due to non-issuance of rejection slips by the NRC office and that’s why the appointment of the 1,600 support staff is also stuck. The Covid-19 pandemic is another reason why there is delay in issuing the rejection slips as officials are busy tackling it,” he added.

Both Sarma and Manivannan said that there’s no clarity yet on when the process of issuing rejection slips, starting the new FTs and issuing of appointment letters to the 1,600 support staff would begin.

Meanwhile, Assam Public Works (APW), the Guwahati-based NGO on whose petition the SC ordered updating of the NRC, has reiterated its demand for 100% re-verification of NRC list.

“The NRC was supposed to be a vital document to bring closure to the pending infiltration issue. But how can we accept this NRC that has included names of illegal Bangladeshis and even ‘jehadis’ in it? A year has passed, but the NRC process is still caught in stalemate,” said APW president Aabhijeet Sharma.

Amid all this, the 1.9 lakh applicants left out of the NRC list are still waiting for the process to move ahead so that they can file appeals, remove the ‘foreigners’ tag and get included in the list as Indian citizens.

“Our names were in the draft NRC released in July, 2018, but names of 16 of my family members including myself, my three children and 5 sisters were missing in the final list. Despite being Indian citizens, we have been labeled foreigners. I hope the process starts soon and our nightmare ends,” said Idris Ali, (43), teacher in a madrasa and resident of Hahsori in Chaygaon of Kamrup district.