The report seeks reservation for Assamese in Parliament, state assembly, local bodies, and regulation of entry of people from other states into Assam. 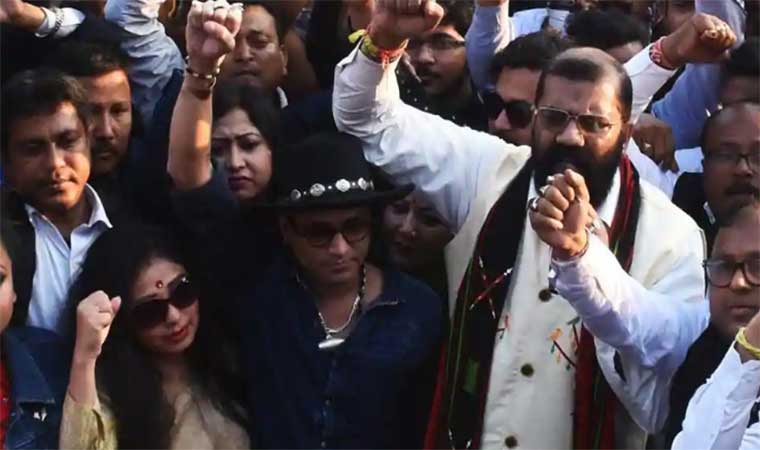 The All Assam Students Union (AASU) on Tuesday made public a high-level committee’s confidential report on the implementation of 1985 Assam Accord’s Clause 6, which pertains to safeguards for the preservation and promotion of Assamese identity and heritage.

The report seeks reservation for Assamese in Parliament, state assembly, local bodies, and regulation of entry of people from other states into Assam.

The tripartite accord involving AASU, whose members were a part of the committee, the state government and the Centre was signed in 1985. It was signed after a six-year agitation against illegal immigrants.

AASU’s chief advisor, Samujjal Bhattacharya, said the report was submitted over five months back, but the state government, as well as the Centre, has remained mum over it.

“There is no clarity as well on whether the Assam government has handed it over to the Centre yet,” Bhattacharya said. He added they were expecting the committee’s recommendations would be implemented. “But as the government has remained quiet on its contents and about its implementation, we decided to make it public so that people in Assam know about it,” Bhattacharya added.

Assam chief minister Sarbananda Sonowal said his government is committed to implementing the clause in letter and spirit. He added both the Assam government and the Centre have been making efforts in this regard.

Justice (Retd) Biplab Kumar Sarma-led 13-member committee submitted the report to Sonowal in February. None of the three AASU members in the committee were present when the report was submitted. AASU was upset that the report was not handed directly to Union ministry of home affairs.

The report proposes January 1951 as the cut-off date for any Indian citizen residing in Assam to be defined as an Assamese for the purpose of implementing Clause 6. The report also seeks quotas in government jobs. It also talks about issues related to land and land rights, linguistic, cultural and social rights and protection of the state’s resources and biodiversity.

Clarity on who can be called an Assamese was one of the committee’s main tasks as the accord did not clearly define it.

The passage of the Citizenship (Amendment) Act (CAA) in December triggered protests in Assam amid concerns that it could encourage a fresh wave of infiltration from Bangladesh and threaten the livelihoods of indigenous people. CAA seeks to fast-track citizenship to non-Muslims from Afghanistan, Bangladesh and Pakistan.

The protests against the law in Assam came in the drop of fears that it could dilute the 1985 accord, under which the government agreed to identify and deport all refugees and migrants who have entered the northeastern state after March 25, 1971. The CAA extends the deadline until December 31, 2014.

AASU general secretary Lurinjyoti Gogoi said to deport undocumented Bangladeshi citizens, who have entered Assam post-March 24, 1971, an extradition treaty should be signed with the neighbouring country. He added borders with Bangladesh should also be sealed.

Senior advocate Nilay Dutta, who was a member of the committee, welcomed the move to release the report so that the recommendations are in the public domain and a discussion is initiated on them.

“The report is meant for the people of Assam and they have a right to know about its contents. If they have any opinion, advice or suggestions about the report, those can be made known now,” Dutta said.

Implementation of Clause 6 remained on the backburner for over three decades till the Centre formed a panel in January last year it to suggest how to do it. All members of the panel resigned amid protests against the CAA.

The new 13-member committee was constituted in July last year. It was given a month’s extension after its six-month tenure expired in January.

“The timing of AASU’s release of the Clause 6 committee report shouldn’t be considered very important. A crisis situation is on right now because of COVID-19 and the government is busy handling it at the moment,” Nani Gopal Mahanta, professor of political science at Gauhati University, said.