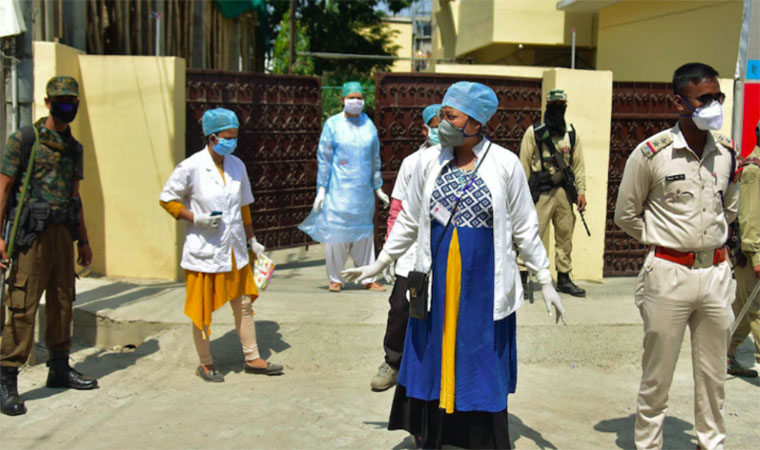 New Delhi: While the revised guidelines of the Indian Council for Medical Research (ICMR) has stated that asymptomatic patients of COVID-19 can be allowed to quarantine at home, the Assam government has said that such a provision to patients can granted only if they give a written undertaking that “the government cannot be blamed for any eventuality”.

State health minister Himanta Biswa Sarma said that aside from a self-declaration stating that they themselves would be responsible for any health consequences, those patients residing in flats and housing societies would also need to get an undertaking from local resident welfare bodies, stating that they have no objection to this.

The health minister’s directive comes at a time when several cases have been reported, including in the capital of Guwahati, where residents have opposed even the entry of doctors and health officials engaged in COVID-19 wards.

The Assam chapter of the Indian Medical Association has termed the latest decision of the government, along with a few others taken lately in connection with the pandemic, as “whimsical” and has advised the government to stick to ICMR’s guidelines.

In a letter written to the health minister on July 7, the IMA advised that the asymptomatic patients be treated at their homes “as it is not possible (to treat them) with limited resources and facilities [that exist] to treat the [a] large number of cases”.

The ICMR guidelines were revised last week due to a rapid rise in the number of COVID-19 positive cases across the country. Keeping in mind the shortage of health officials, the Council under the Union Ministry of Health stated that asymptomatic patients would be included in the list of mild or pre-symptomatic cases and be allowed home quarantine.

However, those above 60 years and with co-morbid conditions like hypertension, cardiac disease, diabetes, kidney/liver or lung diseases, etc. should be allowed home isolation only after satisfactory evaluation of their conditions by the medical officer. Patients suffering from cancer and those who are HIV positive would not be eligible for home quarantine.

The guidelines said patients under home quarantine would be considered discharged after 10 days and after reporting no fever for three days in a row. The patients would thereafter be advised to isolate themselves at home and self-monitor their health condition for seven more days. “There is no need for testing after the home isolation period is over,” the revised guidelines stated.

Like several states, Assam for the last few weeks, has also seen a sudden jump in the number of COVID-19 positive cases. In the last 10 days – between June 30 and July 8, the number of positive cases has nearly doubled – jumping from 7,794 to 13,336. Guwahati has been the most affected, recording 3,891 cases till July 7, leading the government to put it under a strict lockdown for 14 days from July 7 onwards. Minister Sarma told reporters that there is community spread.

Aside from setting up 31 centres where city residents can get themselves tested, the state government also started house to house testing in one ward under Guwahati Municipality (Ward No. 2) on July 8. According to the Assam office of the National Health Mission, the drive would be carried out in a few other wards of the city.

Though the state government has sought even asymptomatic patients’ admittance to hospitals – the number of beds has been increased for the purpose – it does not have adequate number of doctors and other health officials to attend to so many beds.

Interestingly, according to Sarma, the decision to not allow the home quarantine option to asymptomatic patients without an undertaking was necessitated by the lack of an adequate number of health officials to visit them at home at night.

To meet the shortfall, the state government has, therefore, increased the number of days that health officials need to be on duty at the COVID-19 wards and has lessened their quarantine period.

Accusing the government of not planning properly and not consulting health officials, the IMA’s letter, signed by state president Dr. Satyajit Borah and secretary Dr. Hemanga Baishya, pointed out, “Increasing hospital beds without manpower planning will be [a] futile exercise as we have limited resource[s] in terms of doctors and health workers”.

The IMA also “strongly protested” the government’s decision to engage health workers and doctors for 11 days “continuous service in the Covid wards and thereafter only three days of quarantine before re-engaging them in Covid [related] duties subject to testing negative for the disease”.

“It doesn’t require mention that working in Covid wards continuously for 11 days wearing full PPE kits and in this torrid summer, without air-conditioning in most centres, would be very much exerting and exhausting and IMA fears the government’s decision will demoralise the frontline workers,” it stated.

The medical association also opposed the state government’s decision to switch over to antigen tests to check health workers engaged in COVID-19 wards “as the ICMR has already mentioned that this test is less sensitive and a negative test does not rule out Covid.” It moreover requires “confirmation of the negative status by a PCR test.”

The IMA felt that the state government needed to consider the experience of “healthcare professionals and groups in confidence in proper planning to face the challenges rather than taking closed door and whimsical decisions.”

“Otherwise, the much-talked about successful Assam model will collapse in no time”.

Meanwhile, the state government has also reportedly faltered in providing results of the COVID-19 tests on time. While the minister had stated that the test results would be handed out to people within 72 hours, several people, including those whose swabs were collected after arriving in the state by special trains and flights, complained of not getting their results even after shifting home from the mandatory institutional or hotel quarantine stay.