Assam’s Kaziranga National Park authority stated that 108 wild animals, including nine rhinos have died in the national park during the floods. 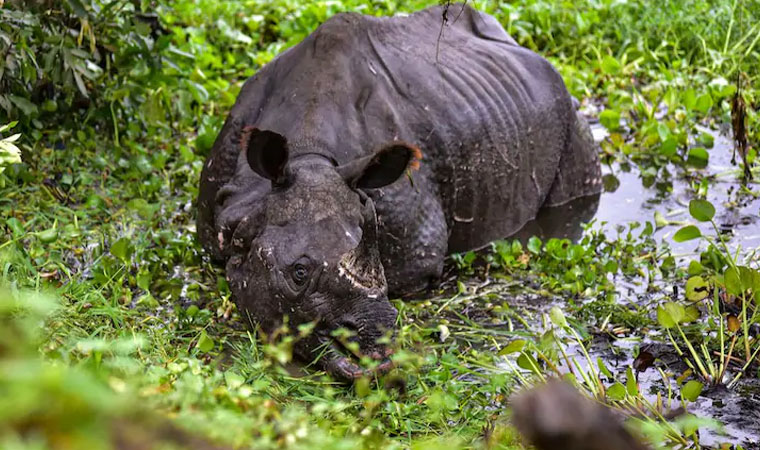 Floods in Assam have claimed the lives of 10 one-horned rhinos and nearly a hundred other animals. According to reports, eight rhinos drowned in floodwaters and one died naturally in Kaziranga National Park and while another drowned in Pobitora Wildlife Sanctuary.

Kaziranga National Park authority stated that 108 wild animals, including nine rhinos, have died in the national park during the floods. As many as 36 hog deer drowned in floodwaters while 15 others were killed by vehicles plying on the stretch of National Highway-37 that passes through the park. Officials added that 85 per cent areas and 45 anti-poaching camps of Kaziranga National Park are still underwater.

The park authority said many animals including rhinos, tigers, elephants, and deer have strayed out from the park due to the floods and are moving towards nearby villages and Karbi hills by crossing NH-37. Rangers and the Centre for Wildlife Rehabilitation and Conservation (CWRC) have so far rescued 133 wild animals, including two rhino calves, four tigers and 103 hog deer during the flood situation.

With two more casualties on Sunday, the Assam floods have claimed 81 lives to date while affecting nearly 27.3 lakh people. A total of 47,023 people are currently taking shelter at 287 relief camps set up by the state government in flood-affected districts.

Officials say 2,633 villages under 75 revenue circles are currently inundated and the floodwaters have submerged over 1.14 lakh hectares of croplands. The water level of Brahmaputra River is still flowing above danger level mark at Neamatighat in Jorhat district, Tezpur in Sonitpur district, Goalpara and Dhubri district.

On the other hand, the floods have damaged 202 embankments, 167 bridges, culverts, and 1,621 roads across Assam so far.

Teams of NDRF, SDRF and district administration have managed to rescue 76,514 people from flood-affected areas.