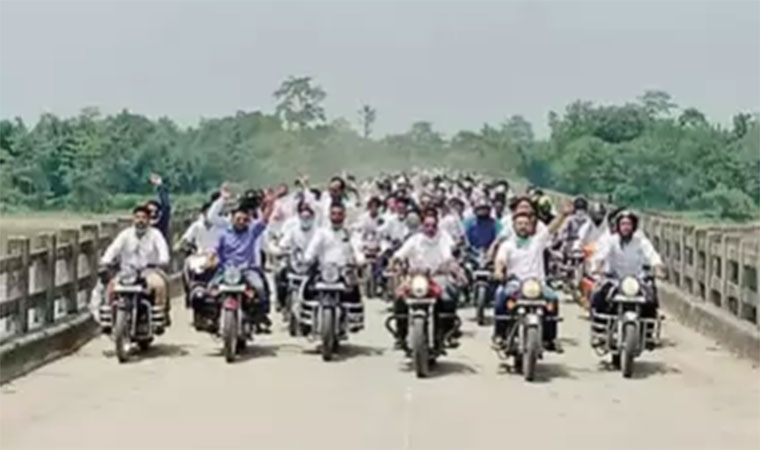 DIBRUGARH: After a gap of 5 months, anti-Citizenship Amendment Act protests were once again back on the streets of Dibrugarh with hundreds of activists of the All Assam Students’ Union (Aasu) taking out a motorcycle rally.
Since the beginning of March, anti-CAA rallies were put on hold across the state owing to the Covid-19 pandemic. The Aasu members started the rally from Chowkidinghee and passed through all the major roads of the town before proceeding towards the residence of chief minister Sarbananda Sonowal in Lakhi Nagar area of Dibrugarh beside the Mancotta road. All the motorcycles stopped just beside the chief minister’s residence and the Aasu members started raising slogans against the Citizenship Act. Caught by surprise, security personnel scrambled and threw a protective ring around the CM’s.

Slogans including “aami namanu” (We won’t accept CAA), “Sarbananda Sonowal murdabad”, “Narendra Modi murdabad”, “BJP Go Back” and “Jai Aai Asom” (Glory to Mother Assam) went on for a good 20 minutes. The protesters later proceeded all the way to Tingkhong.

“Our protest against the Citizenship Amendment Act is back. Due to the Covid-19, pandemic we had put our agitation on hold since the beginning of March. Now, it will be back in full force. As we have said before, Assam will not shoulder the burden of a single Bangladeshi entering the state after 1971, be it Hindu or Muslim,” Aasu Dibrugarh district general secretary Sankor Jyoti Baruah said.

The resumption of agitational activities against the Citizenship Amendment Act (CAA) comes amid recent reports that the Union home ministry has sought three additional months to frame CAA rules.

According to the manual on parliamentary work, rules for legislation should be framed within 6 months of the date of the President’s assent or the standing committee on subordinate legislation should be approached for extension of time. The six-month period for framing CAA rules ended in mid-June. If the 3-month extension is allowed, it gives the home ministry time until mid-September to frame the rules.