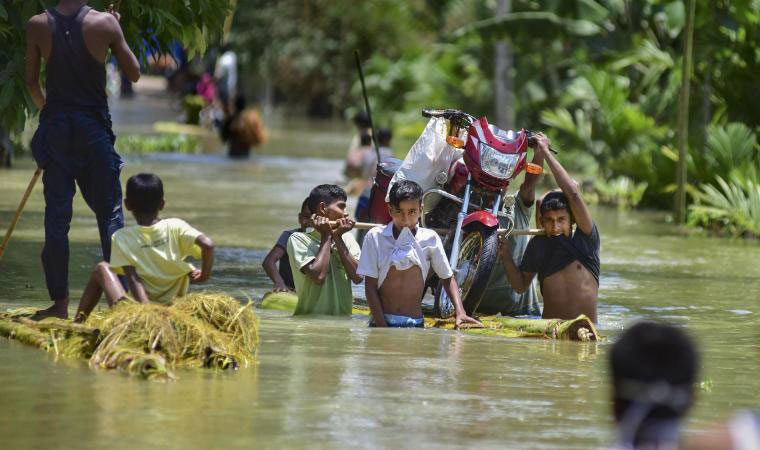 GUWAHATI: Two more persons died taking the death toll to three as nearly three lakh people have been affected in the first wave of the flood in Assam this year.

All three deaths were reported from Goalpara district of Lower Assam.

The Brahmaputra and the Kopili rivers were flowing above the danger level at two places.

Cropland affected was in areas of 21,572 hectares. Altogether 45,981 animals were also affected.

The flood water has damaged river embankments, roads and bridges in the affected districts.

The authorities set up 91 relief camps in Hojai, Goalpara, Tinsukia and West Karbi Anglong where over 18,000 people were taking shelter.

In order to tackle the flood situation and manage relief and rescue operations, the state government directed all District Magistrates to engage school and college teachers and staff of other departments who were not actively involved in the COVID-19 duty.

Chief Secretary Kumar Sanjay Krishna visited Hojai district on Thursday and took stock of the flood situation. Fifty five revenue villages in the district were in the grip of the deluge.

Meanwhile, following a slight improvement in weather conditions, a Chinook helicopter of the Indian Air Force on Thursday dispatched essential commodities in the remote Vijoynagar circle of Changlang district.

The 16 villages in Vijoynagar, which is bound by Myanmar on three sides, have a combined population of around 4,500.