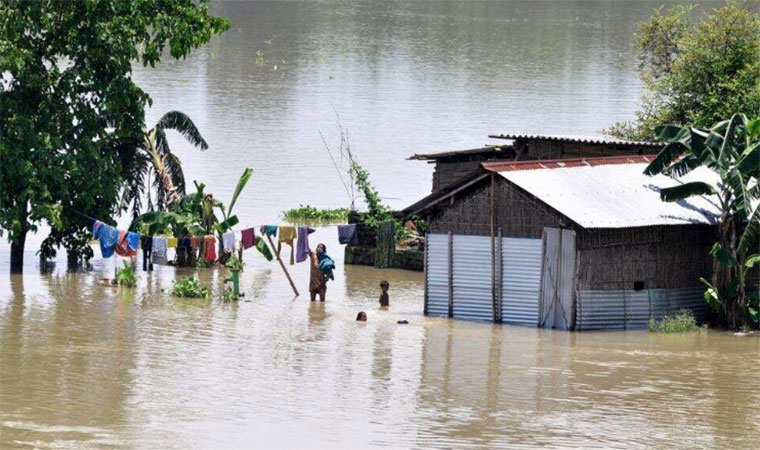 GUWAHATI/SHILLONG: Amid rising Covid-19 cases, the flood situation in Assam remained grim on Tuesday while two more people died in Nagaon and Morigaon districts, raising the death toll in the monsoon deluge to 87, while around 24.20 lakh people in 24 of the 33 districts continue to be marooned.

Besides Assam, at least five people were killed in floods in Meghalaya’s West Garo Hills district where the deluge has affected about one lakh people during the past few days. Meanwhile, heavy monsoon rain affected normal life in most other northeastern states. The rainwater has inundated vast human habitations and low lying areas of Tripura, Meghalaya and Mizoram.

In the ongoing annual monsoon flood, western Assam is the worst affected. According to the officials, of the 24.30 lakh people currently affected in Assam, around 16 lakh are in five districts — Goalpara (458,020), Barpeta (352,587), Morigaon (314,955), Dhubri (277,612), and South Sakmara (179,700) districts, all in western Assam.
Forest department and Assam State Disaster Management Authority (ASDMA) officials said that at least 116 animals have been killed in floods and 143 animals rescued even as 90 per cent of the world famous Kaziranga National Park, home to more than 2,200 one-horned Indian rhinoceros, remained flooded.

The officials said that the floods — which have inundated the state for over a month now — had resulted in 87 deaths so far in Kamrup (Metro), Baksa, South Salmara, Darrang, Sonitpur, Biswanath, Tinsukia, Lakhimpur, Bongaigaon, Kamrup, Golaghat, Sivasagar, Morigaon, Dhubri, Nagaon, Nalbari, Barpeta, Dhemaji, Udalguri, Goalpara and Dibrugarh districts, while 26 others were killed in separate landslides since May 22.

The ASDMA officials said that as many as eight rivers — Siang, Dhansiri, Jia Bharali, Kopili, Beki, Gaurang, Kushiyara, Sankish — besides the mighty Brahmaputra are flowing above the danger mark in a large number of places in 12 districts. The officials said that over 2,323 villages and 110,323 hectares of crop area in 24 districts have been flooded. The district administrations has set up 397 relief camps and distribution centres in 24 districts, where around 45,000 men, women and children have taken shelter.

Of the 24 districts across Assam, 15 districts — Dhubri, Goalpara, Barpeta, Morigaon, South Sakmara, Dhemaji, Lakhimpur, Darrang, Nalbari, Kamrup (Metro), Kamrup (Rural), Nagaon, Golaghat, Majuli, Bongaigaon — are the worst-hit.
Besides erosion of river banks at a large number of places, roads, embankments, bridges, culverts and other infrastructure were damaged at many locations in the 24 districts, the officials said, adding that hundred of houses were fully or partially damaged due to the floods.

Around 14 lakh domesticated animals and over 8 lakh poultry birds were affected due to floodwaters. Besides Kaziranga National Park, located on the edge of the eastern Himalayan biodiversity hotspots of Golaghat and Nagaon districts, the Manas and R.G. Orang national parks, the Pabitora and Tinsukia wildlife sanctuaries were also affected.