Besides deaths due to drowning, 26 more people have died across the state since May due to landslides caused by heavy rain, as per ASDMA. 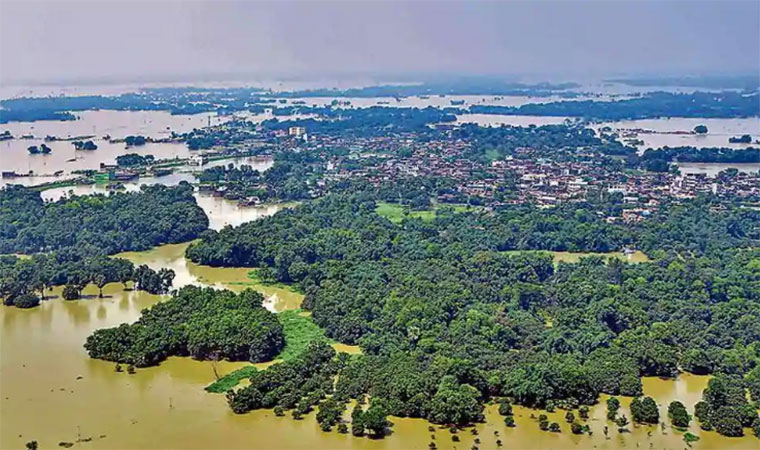 An aerial view of a flood-affected area in Darbhanga district of Bihar on Sunday.(PTI)

The flood situation remained grim in Assam and Bihar on Sunday with five more deaths and nearly 4 million people affected in the two states.

According to a bulletin issued by Assam State Disaster Management Authority (ASDMA), the five fresh deaths raised the flood-related toll in the state to 102.

Besides deaths due to drowning, 26 more people have died across the state since May due to landslides caused by heavy rain, as per ASDMA.

Nearly 46,000 people uprooted due to floods were taking in 457 relief camps in 16 affected districts.

Union minister for development of north eastern region Jitendra Singh spoke to Assam chief minister Sarbananda Sonowal and assured him help from the Centre and the North Eastern Council to restore and repair the infrastructure damaged in floods.

Meanwhile, the situation continued to deteriorate in Bihar, with the water level of the Ganga river breaching the danger mark at Kahalgaon in Bhagalpur and overflow from the Gandak flooding more areas on Sunday.

According to the water resources department (WRD), the rise in water level of the Ganga in Patna and Munger has affected Diara and low-lying areas on its course. Rivers such as Bagmati, Burhi Gandak, Kamla, Adhwara and Mahananda are also flowing above the danger level, putting pressure on embankments at different places.

According to news agency PTI, a 25-year-old woman gave birth to a baby girl on board an NDRF rescue boat plying on the swollen Burhi Gandak river in flood-affected Bihar on Sunday, officials said.

The woman was being rescued from her marooned house in Gobari village of East Champaran district when she developed severe labour pain and later delivered the baby around 1:40 pm, they said.

The National Disaster Response Force (NDRF) team was accompanied by an ASHA (accredited social health activist) worker who helped in the childbirth, an NDRF spokesperson said in Delhi.

So far, about 1.50 million people residing in 625 panchayats of 86 blocks across 11 districts have been affected due to the recent spell of floods in north Bihar. WRD officials said that the situation might worsen as the meteorological department had predicted heavy rains in the Himalayan region in Nepal and planes of north Bihar in the next 72 hours.