The two men, who were working at the site to control the blow out, were missing shortly after the exploded and caught fire on Tuesday.drowned. 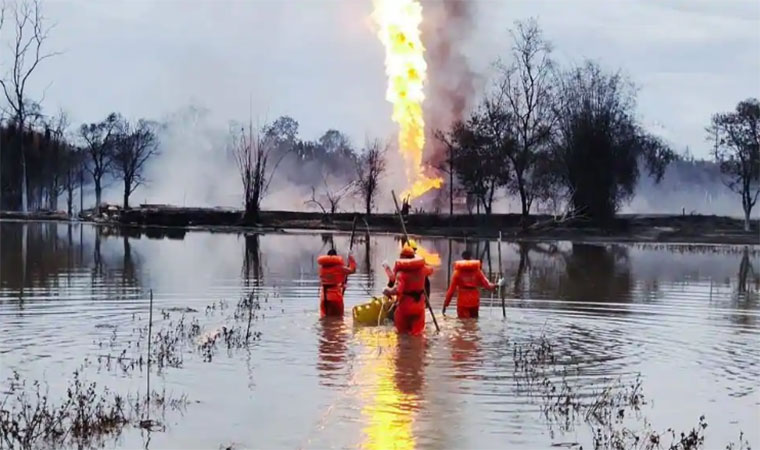 Personnel from NDRF during a search operation for two OIL employees at a pond near a blazing gas well in Assam’s Tinsukia district. (NDRF)

The fire that broke out on Tuesday at Oil India Limited’s (OIL) natural gas well in Assam’s Tinsukia district, has claimed lives of two firefighters even as authorities were gearing up for a long haul to put out the blaze.

The bodies of Durlov Gogoi, 30, a former footballer who had represented the Assam team as a goalkeeper and Tikheswar Gohain, 56, both assistant fire operators with OIL, were recovered by NDRF personnel from a water body close to the well at Baghjan that suffered a blowout two weeks ago before catching fire on Tuesday.

The two men, who were working at the site to control the blowout, were missing since 1:14 pm on Tuesday, when the well exploded and caught fire. It is assumed they ran to the water body to escape, but were drowned.

“It was a difficult operation to retrieve the bodies as the water was warm and fire at the well was blowing very high. The two bodies were found close to each other. They were later handed over to the local police,” said Inspector Saurabh Singh of National Disaster Response Force (NDRF).

In a statement on Wednesday, OIL said immediate compensation has been disbursed to the families of the deceased. Four other persons, two from OIL, one from Oil and Natural Gas Commission (ONGC) and a contract worker, working at the well when it caught fire, sustained minor injuries.

“The team of experts from Alert Disaster Control, Singapore, visited the well site on Wednesday morning along with OIL and ONGC teams to assess the current situation and is currently preparing a roadmap for the next course of action,” read the OIL statement.

Assam Chief Minister Sarbananda Sonowal apprised Prime Minister Narendra Modi of the situation at Baghjan over the telephone. The CM’s office in a statement said that the PM has assured all help to tackle the situation.

According to OIL, while the foreign experts have expressed confidence about controlling the fire and capping the well safely, the operation requires large quantities of water, installation of high discharge pumps and removal of debris. All these could take nearly four weeks.

“There are few methods to control a blow out. First the area near the well is cleared of all debris. One of the oldest techniques is to carry out a blast at the well so that there is lack of oxygen and gas (or oil) in the area and the fire gets doused,” said a retired oil drilling expert refusing to be named.

“Another method is to drill another well or wells near the site and connect them to the blow out well allowing the gas or oil to get diverted. Another option is to put a new Blow out Preventer (BoP), which are large valves used to cap the well on the surface,” he added.

The entire process needs a lot of planning and coordination and can easily take weeks, the expert said.

The fire is expected to have a damaging impact on the flora and fauna of the Dibru Saikhowa National Park, located around 1 km away from the gas well and also the eco-sensitive Maguri Mottapung wetland barely a few hundred metres away.

“Release of particulate matter and the fire will affect Dibru Saikhowa National Park. But the damage to Maguri Mottapung weltand will be immense. If this continues for another four weeks, humans will also not remain unaffected by the pollution,” said environmentalist Rituraj Phukan, who is also a member of IUCN (International Union for Conservation of Nature)

“Despite a history of over 100 years of oil and gas exploration in the area, it is surprising we don’t have the experts and equipment to deal with such an emergency,” he added.

Two days after the blowout happened, the carcass of a Gangetic dolphin with its skin peeled was found at the Maguri Mottapung wetland. There’s no confirmation yet on whether it died due to release of gas and condensate from the OIL well.

The incident has raised questions about the role of John Energy, a Gujarat-based company which was conducting the work over operations at the well under supervision of OIL when the blowout happened.

Workover is an intervention in an existing oil or natural gas well that requires invasive techniques like wireline, coil tubing or snubbing.

The Baghjan well was producing 1 lakh standard cubic metre per day (SCMD) of gas at a depth of 3,870 metres. The blowout happened when workover operation was underway to produce gas from new sand (oil and gas bearing reservoir) at a depth of 3,729 metres.

In the present case, while the workover operation was underway the head of the well was being repaired. The BoP installed in the well was also removed when gas started leaking from the well and resulted in the blow out.

“The company is carrying out an internal inquiry and two officials responsible for the well have been placed under suspension. The probe will reveal if they were responsible or not,” said OIL spokesperson Tridiv Hazarika.