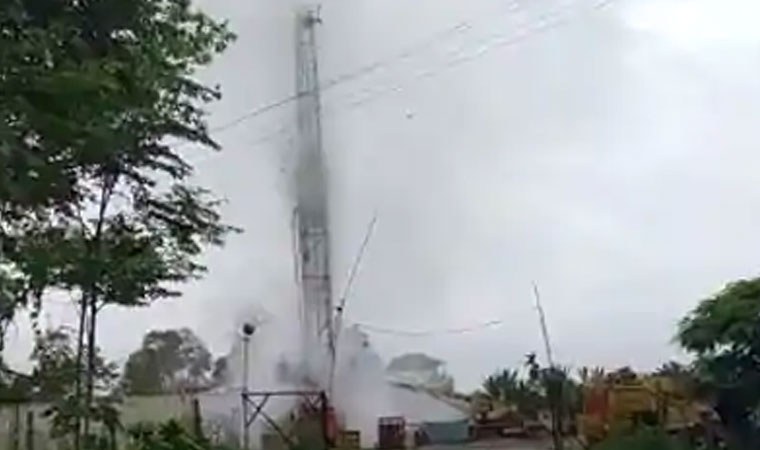 On May 27, a major blowout took place at the OIL well at Baghjan in Tinsukia district

Guwahati: Gas is “uncontrollably” flowing out of a natural gas producing well of Oil India Ltd (OIL) in Assam after a blowout eight days ago and the public sector undertaking on Thursday said an expert agency is monitoring the environmental impact of the leak.

Pumping of water to the well through the casing valve is in progress to minimise chances of fire, a press release issued by the PSU major said.

On May 27, a major blowout took place at the OIL well at Baghjan in Tinsukia district, next to Dibru Saikhowa National Park, forcing the administration to evacuate thousands of people living nearby to relief camps.

Digging of the water reservoir near the plinth of the well is complete, an area for placement of pumps of 2,500 gallons capacity is underway along with arrangement for collection of the required quantity of water from the source, the release said.

The company has called a Singapore-based firm which is expected to reach the site shortly, it said.

Building of an approach road is in progress at the well site.

A National Accreditation Board for Education and Training (NABET) accredited consultant, engaged by the company to carry out environment impact assessment study, has started work at the site, the release said.

The company’s fire service unit is stationed at the site for continuously water jacketing the well to avert any eventuality, it said.

The presence of gas, air and water quality is being monitored at constant intervals at strategic points, besides picking up layers of condensate deposited near the site.

Ambulances with para-medical staff are on stand by and a team of National Disaster Response Force (NDRF) has been mobilised to look after the relief operation.

Fabrication and testing of equipment required for controlling the well is taking place at OIL workshop as it has been assessed that approach to the vicinity of the well would not be safe due to gas gushing at high pressures.

On May 29, the Assam Forest Department had issued a notice to OIL after dead river dolphins and fish were found in a lake nearby Dibru Saikhowa National Park and it was reported that had died due to the blowout.