After North Eastern coalfields in Assam’s Tinsukia announced the suspension of its operations, thousands gathered to protest in Margherita town of the district. 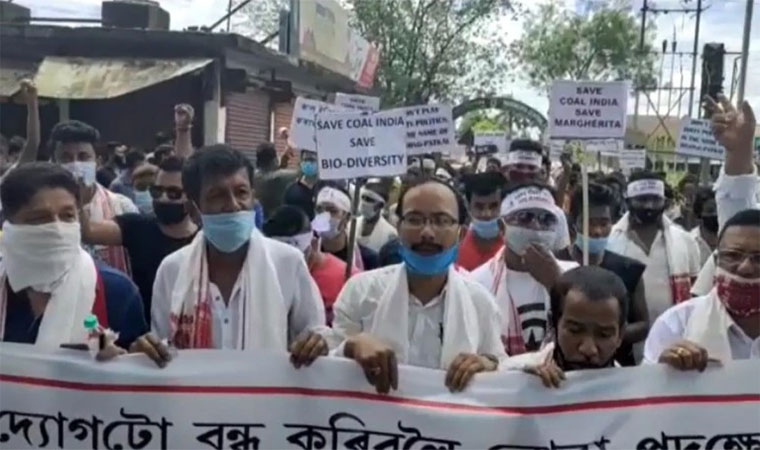 The North Eastern Coalfields (NEC), a Coal India Limited (CIL) subsidiary, has announced the temporary suspension of all its mining operations. This comes following the ongoing protests against the Centre’s decision to allow coal mining in Dehing Patkai Wildlife Sanctuary.

In an order issued by the office of the General Manager, NEC said, “All mining operations in North Eastern Coalfields, Coal India Limited, Margherita are hereby temporarily suspended with effect from June 3″.

Opposing the decision, NEC employees and thousands of locals staged protests on Friday in front of the NEC office in Margherita.

The protesters raised slogans against the NEC, demanding that it resume its operations. They also called for the government to protect Dehin Patkai Wildlife Sanctuary.

Various industries in the region are severely hit following the suspension of operations in coalfields.

In a statement, NEC said, “Coal mining operations in Tikak Open Cast Project (OCP), falling under Saleki Proposed Reserve Forest of Digboi, have been suspended since October 2019 on the directive of Department of Forest, Government of Assam and it is awaiting the Stage II clearance from Ministry of Environment, Forest and Climate Change (MoEF&CC). Currently, production is on hold in Tikak OCP”.

It further said, “…Final clearance, which is Stage II for this project is to be granted by MoEF&CC after fulfillment of certain conditions by the project proponent, North Eastern Coalfields, and only then extraction of coal can be done. Following a meeting in April 2020, the principal conditions were that a site-specific mine reclamation plan in consultation with Assam Forest Department has to be submitted by NEC for whatever forest area has been broken up- of around 57 Hectares out of a total 98.59 Hectares. The other condition being- for the rest of the unbroken area for the user agency, NEC needs to submit a feasibility report for exploring underground mining”.