The state government is concerned about the region’s biggest city Guwahati. Fifty thousand tests to be done in the city to check possible community spread. 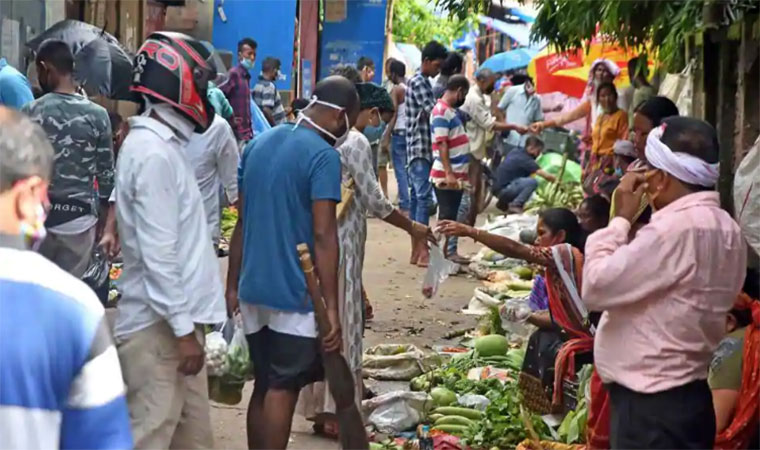 People shun social distancing norms while buying vegetables at a market in Guwahati on Sunday.(ANI Photo)

Assam’s Covid-19 tally crossed the 4,000-mark on Sunday after 106 new cases were detected. By Monday noon, the tally further increased to 4,159.

While the graph for infections is rising sharply – around 200-250 new cases daily since June 4 – the recovery rate has also shown an upward trend. A total of 460 patients had recovered in the state on June 4. The figure was 1,961 on June 14.

The sharp rise has been attributed to return of nearly 2.5 lakh people to the state from other parts of the country. The migrants started arriving in Assam on May 4 when inter-state movement resumed.

“I am expecting a further spike in cases in the next few days as nearly 25,000 more people are expected to reach the state by trains. Seventeen of these trains would come from Kerala and two from Karnataka,” Assam health minister Himanta Biswa Sarma told journalists on Saturday.

Other states in the North-East have also recorded a spike, due to homecoming of returnees. Tripura, with 1,079 Covid-19 cases, has the second highest tally in the region followed by Manipur with 458 cases till Sunday. Nagaland has 168 cases, Mizoram 117, Arunachal Pradesh 91 and Meghalaya 44.

Guwahati could be under lockdown

While the number of Covid-19 cases in Assam is increasing rapidly, the government is more concerned about the state’s and the region’s biggest city Guwahati where over two dozen cases without any travel or contact history have been detected till date.

“The situation in Guwahati is a bit critical as we have 25 cases without any history. It is worrying and we have decided to increase our surveillance mechanism,” Sarma said on Saturday.

From June 15, the state government has decided to conduct 50,000 tests till the end of the month to check possible community spread of the disease. Tests would be carried out at petrol pumps, loading, unloading and parking sites of trucks coming from outside, eateries on highways, weigh bridges etc.

“We have a suspicion that most cases without history have some connection to these places frequented by truckers from outside the state. As per Centre’s guidelines, the truck drivers and attendants are not tested for Covid-19 and are allowed to leave without spending time in quarantine,” said Sarma.

Residents who feel that they have some Covid-19 related symptoms can also visit 12 healthcare centres across the city and get themselves tested free of cost.

“If we see the situation deteriorating and if we get a sizeable number of positive cases in the 50,000 tests residents of Guwahati will have to be ready for another lockdown. If we have to take tough decisions, we will not shy away from it,” Sarma said.