Normal life has been hit in lower Assam because of the 12-hour bandh on Monday.

The bandh has been called by several organizations opposing formation of Union Territorial Council (UTC), covering BTAD and three other districts of Assam. 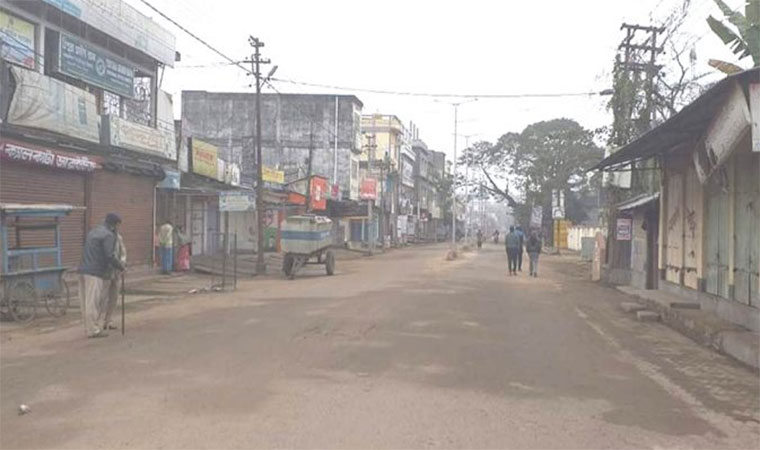 Notably, the Centre is likely to sign another Accord with all the factions of the National Democratic Front of Boroland (NDFB) in New Delhi on Monday.

It has been reported that as part of the Accord, the Centre may grant formation of a Union Territorial Council (UTC) covering the four districts under Bodoland Territorial Area Districts (BTAD) and 3 other districts.

The three other districts, which would reportedly come under the UTC, are Sonitpur, Biswanath and Lakhimpur districts.

Leaders of all the factions of the NDFB including NDFB-S (Saoraigwra), NDFB-P (Progressive, NDFB-R (Ranjan Daimary) and NDFB Govinda Basumatary faction are currently camping in New Delhi.

The organizations, which have called for the bandh, resolved that they would continue to protest against the formation of UTC from January 27 until the government discusses the issues of the non-Bodo people living in the region in the political level.

The organizations also demanded that the Kamatapur Liberation Organization (KLO), which has continued an armed struggle for a separate Kamatapur state since 1993, be invited for peace talks to solve the long-pending issue.

However, officials in the Ministry of Home Affairs (MHA) told Northeast Now that the reports of creation of Union Territorial Council (UTC) in BTAD are absolutely wrong.

Sources said the Centre will sign a peace Accord with NDFB militants on Monday in Delhi in the presence of union home minister Amit Shah.

According to MHA sources, there is absolutely no possibility of creating a separate Bodoland state or UTC as part of the peace Accord.

According to another information, the Bodoland Territorial Council (BTC) is on a threshold of gaining more autonomy and accorded a special status.

If the sources in the government agencies are to be believed the proposed memorandum lays down rules where the autonomous council will have special rights for the domiciles, and ‘outsiders’ will have to obtain a ‘permit’ to work in the areas.