This is the first evidence of tiger breeding in the protected area, a buffer zone of Kaziranga National Park and Tiger Reserve (KNPTR), where the entire rhino population of around 70 was wiped out by poachers in 1983-84 at the peak of the Assam Agitation against foreigners of Bangladeshi origin. 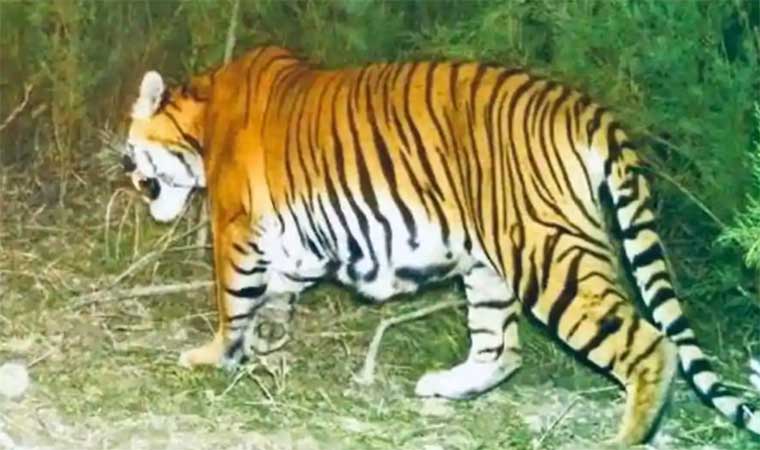 Amidst deaths of wild animals due to floods, photos of a tigress and her two cubs captured on a camera trap inside Assam’s Laokhowa Burhachapori wildlife sanctuary have brought cheer among forest and conservation activists.

This is the first evidence of tiger breeding in the protected area, a buffer zone of Kaziranga National Park and Tiger Reserve (KNPTR), where the entire rhino population of around 70 was wiped out by poachers in 1983-84 at the peak of the Assam Agitation against foreigners of Bangladeshi origin.

Located on the south bank of the Brahmaputra and spread over 114 sq km, Laokhowa Burhachapori lies within KNPTR and the Orang National Park and is part of the Kaziranga Orang Riverine Landscape (KORL), a major gateway for straying animals within protected areas of central Assam.

“Prior to 2007, Laokhowa Burhachapori was treated as redundant in terms of wildlife conservation when we lost all our rhinos during the Assam Agitation. The area was brought under KNPTR in 2007 and conservation efforts renewed,” said P Sivakumar, director, KNPTR.

The efforts bore fruit and within a few years the presence of four tigers was reported in the area, but there was no photographic evidence. In February 2013, a camera trap captured the photo of a tigress indicating wildlife was thriving again in the sanctuary.

“Before we started our conservation efforts, the area was under the grip of encroachers. There used to be around 240 cattle stations inside Laokhowa-Burhachapori. We removed the encroachments and now the area is protected. It’s a good sign that tigers have started using the area as a habitat,” said Sivakumar.

He informed that more than 30 camera traps were placed inside the area last year and they have been able to capture photos of four tigers between February and April this year.

Sivakumar mentioned that there are now around 145 plus tigers in KORL—125 in Kaziranga and Laokhowa-Burhachapori and 19 in Orang. The data for Biswanath wildlife division, which is also part of KNPTR, is yet to be collected.

“The camera trap photo confirms breeding of tigers in Laokhowa Burhachapori for the first time. This is a significant development and will strengthen tiger conservation efforts,” said M Firoz Ahmed, head of tiger research and conservation division at Aaranyak, a Guwahati-based wildlife NGO.

“Tigresses don’t move from an area with their cubs till they are around two years old. Breeding by tigers in Laokhowa Burhachapori shows that there is a good prey base in the area and the ecosystem is healthy,” he added.

Nearly 85% area of KNPTR spread over 430 sq km is inundated by flood waters at present. This monsoon, 129 wild animals including 14 rhinos (10 drowning, 4 natural causes) have died in and around the park.