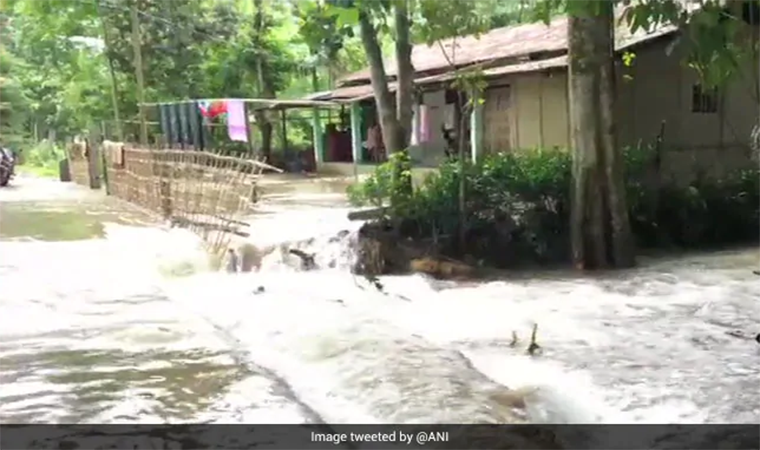 Guwahati: Assam is battling twin disasters of floods and coronavirus this year. Floods, triggered by heavy monsoon rain, have killed 20 people and forced lakhs to flee their homes. The Brahmaputra river in Guwahati is flowing above the danger level and more rain is likely in the next few days, the weather office has said.
“Water level of the Brahmaputra is flowing 20 centimetre above danger level and it is rising by one to two centimetre per hour,” Sadikul Haq of the Central Water Commission told news agency ANI.

According to the Assam State Disaster Management Authority 23 of the state’s 33 districts are affected, the worst being Dhemaji, Lakhimpur, Biswanath, Udalgiri, Darrang, Nalbari, Barpeta, Bongaigaon, Kokrajhar, Dhubri Goalpara and Kamrup. Over 9.5 lakh people in the state are badly hit by the floods. The state government has set up 144 relief camps and over 28, 500 people have been shifted there.

“Two people have died in separate incidents of drowning in the past 24 hours…the flood situation is turning critical by the hour,” a state government flood bulletin was quoted by news agency Reuters.

“The flood situation remains extremely grave as several embankments have breached,” Assam Water Resources Minister Keshab Mahanta said. Most of the Kaziranga National Park, is also under water according to authorities.

Central forces have been deployed across Assam for rescue operations and to ensure COVID-19 measures are being followed in the relief camps.