Assam Minister Phanibhushan Choudhury, who was touring the flood affected areas of Bajali, admitted that the situation is serious. 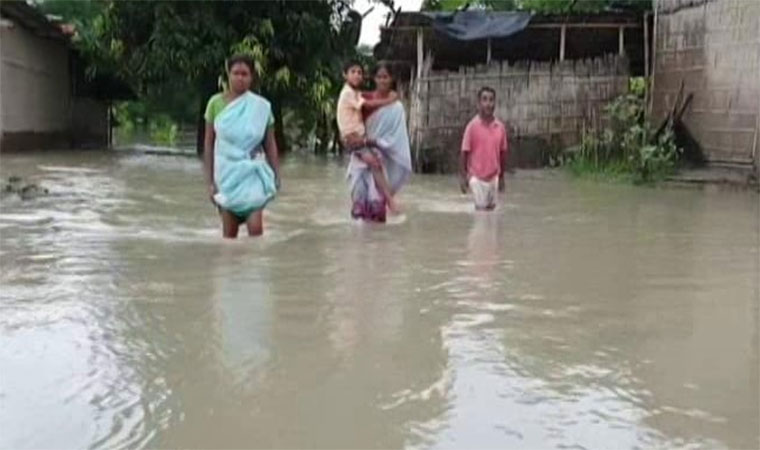 Guwahati: The floods in Assam this year have been more harmful to farmers as water is breaching river embankments. Hundreds of acres of cultivable land in many districts have been flooded, severely hitting the livelihoods of cultivators.
36-year-old Manju Das wades through flood water along with her family in Padupara village of lower Assam’s Barpeta district, which is the worst-hit by floods.

She is almost in tears when NDTV asked her have they been making ends meet. She says her family hasn’t eaten in the last two days.

“We are not getting to eat properly, even utensil have been washed away… this way, how long will be survive. Every year the floods batters our lives,” Ms Das said.

“This is the third time our area has flooded, and like last year, the embankment has been breached,” Ranjit Thakuria, a farmer from Padupara says.

Over 1.28 lakh hectares of cropland is under flood waters in Assam.
Locals claim that the embankment at Pahumara, a Brahmaputra tributary, was constructed in 1971 and has only been repaired, never rebuilt.

NDTV travelled to Bajali in the Barpeta district to find out why the embankments are the weakest link in Assam’s flood flight.

“Two years back, the embankment snapped near my house, but they did not repair it fully, only on top they made it broad. We even now don’t have money to buy masks. Floods are a bigger threat then coronavirus for us,” Kridit Thakuria said.

In the last six decades, Assam has built a network of about 5,000 km of embankments along the Brahmaputra and its tributaries. But over half of these embankments are well past their lifespan.

Last year, Assam had sanctioned almost Rs 1,100 crores for 271 embankment repair projects but according to government sources, majority of them missed the April deadline.

Assam Minister Phanibhushan Choudhury, who was touring the flood affected areas of Bajali, admitted that the situation is serious.

“The situation is serious. The lifetime of most of the embankments has got over. The government is aware. We will get them repaired,” he said.

The ground level government officials say battling floods and COVID-19 together is a tough task.

Nearly 33 lakh people in 28 districts are affected with the floods. 59 people have already died and over 3,300 villages remain inundated.

At least 180 embankments in the state have breached, which are part of close to 5,000-km-long embankment network along the Brahmaputra.