A one-horned rhinoceros and a calf wade through flood water at the Pobitora Wildlife Sanctuary in Assam, India, Thursday. Floods and landslides triggered by heavy monsoon rains have killed dozens of people in this northeastern region. The floods also inundated most of Kaziranga National Park, home to a large concentration of the rare rhino species.
Anupam Nath/AP 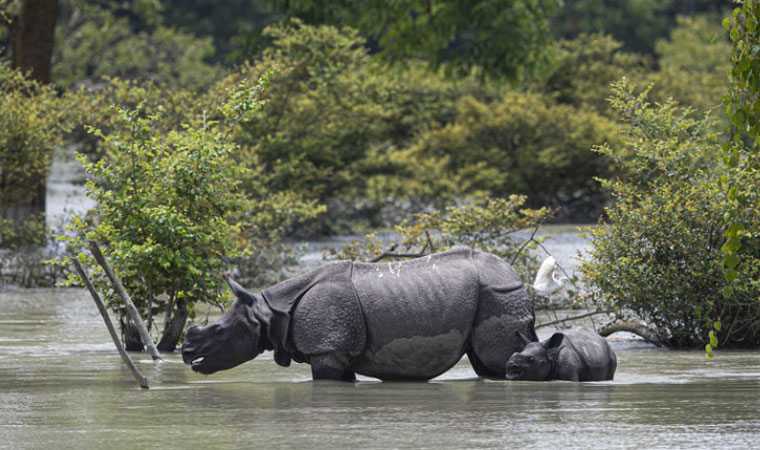 Heavy rains lashing India’s northeastern state of Assam have triggered severe flooding and landslides, killing at least 80 people. More than a million people have been moved to relief centers. Thousands of villages are underwater as authorities try to rescue people — and animals. Large swaths of a national park, home to a number of rare species, are submerged.

As much as 95% of Kaziranga National Park may be underwater, Indian media report. Forest officials have been deploying boats with crews working to save stranded animals. The national park’s director told reporters Wednesday that at least 66 wild animals, including rhinos and deer, have died. Some 170 animals have been rescued, including a female rhino calf. Officials say she got separated from her mother during the floods and is now at the park’s rehabilitation center.

A female rhino calf was separated from her mother due to high flood in the Agartoli range yesterday. As we could not locate the mother, team CWRC along with @kaziranga_ staffs rescued it and currently under care at our rescue centre-CWRC. @ParimalSuklaba1 @wti_org_India pic.twitter.com/LLPHrDPQ8Z

But its most famous residents are the greater one-horned rhinoceroses. According to UNESCO, the park has more than 2,000 of them — the largest concentration of this species of rhinos anywhere in the world.

At the start of the 20th century, only about 200 greater one-horned rhinoceros were alive. Hunters drove the rhinos to the brink of extinction, poaching their horn, which is used in some traditional Asian medicine. Conservation efforts at Kaziranga played a huge role in their recovery. The national park was declared a UNESCO World Heritage Site in 1985.

The greater one-horned rhino is still classified as a vulnerable species, which means it faces a “high risk of extinction in the wild,” according to the World Wildlife Fund. Earlier, poachers were considered the biggest threat to these mammals, but in recent years, more rhinos have died due to annual monsoon floods. Last year 17 rhinos perished when the national park was submerged. In 2017, 31 rhinos were killed during floods.

But the floods may not be all bad.

“This annual phenomenon plays an important role in maintaining the balance of the local ecosystem,” writes conservationist Jack Bedford with the U.K.-based nonprofit Save the Rhino International.

Bedford says floodwaters deposit nutrients that make the grasslands more fertile. That means more food for rhinos and other herbivores. Floods also help root out invasive species like the water hyacinth, which threatens the native flora that rhinos eat.

But floods can exacerbate human-wildlife conflict. As Kaziranga gets inundated, herds of elephants and other animals have been making their way to nearby villages at higher elevations.

“The period of flood in Kaziranga has been a golden time for poachers … as the rhinos move to high lands in search of rehabilitation and fodder and escape the floods,” Parimal Suklabaidya, the environment and forest minister for Assam state, said in a statement last year.

While floods are an annual occurrence in eastern India, rescue efforts have been complicated by the coronavirus pandemic this year. On Friday, India recorded its biggest spike so far in new infections, taking its total recorded caseload to over 1 million.