The company and the Tinsukia district administration have moved more than 7,000 people from nearby areas of the gas well site to 14 relief camps. 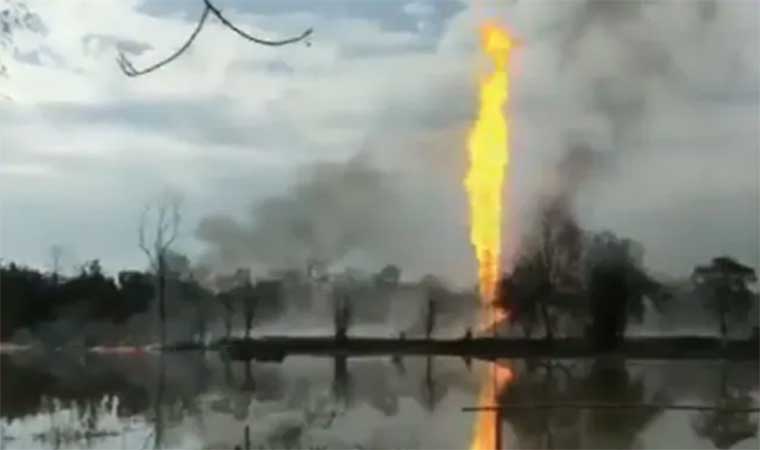 Assam Chief Minister Sarbananda Sonowal, who accompanied Mr Pradhan to the disaster site and relief camps, said a model and a veterinary hospital, a higher secondary school and a skill development centre will be set up in Baghjan.

“Today I announce that the Baghajan embankment will be constructed at a cost of Rs 27 crore,” he said.

“We will compensate all the affected people. Tea gardens, betel nut trees, fishes, houses and any other properties that have been damaged will be compensated in consultation with the Assam government,” Mr Pradhan told people living in a relief camp.

After visiting the well site, the Union minister said the Centre and the state government are trying for a permanent solution to the disaster so that it never recurs.

“Oil India is an Assamese company. It has been working here for many decades. Both the Centre and the state have constituted high-level inquiry committees. We will punish the culprit for this disaster even if he is a powerful man,” Mr Pradhan asserted.

The company and the Tinsukia district administration have moved more than 7,000 people from nearby areas of the gas well site to 14 relief camps.

Mr Sonowal said all the affected people will be compensated after a thorough survey by the administration.

The chief minister announced that a concrete road between Baghjan and Tinsukia city will be constructed. A women self-help group of the area will be provided financial assistance.

“The Maguri-Motapung wetland is Baghjan”s property. Oil India will clean the wetland,” he said.

Mr Sonowal said experts are trying their best to douse the blaze as soon as possible for rehabilitating the displaced people.

Interacting with the two leaders, the locals submitted a memorandum with a host of demands for rehabilitation and compensation.

The well number 5 at Baghjan has been spewing gas uncontrollably for the last 19 days and it caught fire on Tuesday afternoon.

The blaze at the well is so massive that it can be seen from a distance of more than 30 kms with thick black smoke going up several metres high, endangering the local biodiversities.

Though there is no fire in the periphery of the well site at present, the company has declared an area up to 1.5 km of radius as “red zone” to avoid any untoward incident.

At present, five inquiries are taking place to find out facts — a three-member probe by the Ministry of Petroleum and Natural Gas, a one-member probe ordered by the chief minister and an internal five-member inquiry by OIL.

Besides, two more crucial independent investigations of technical nature are being carried out by the Directorate General Of Mines Safety (DGMS) and Oil Industry Safety Directorate (OISD).

The chief minister also ordered the Additional Principal Conservator of Forest (Wildlife) to conduct a study on the impact of the explosion on the environment and ecology of the surrounding areas, including on flora and fauna in the adjacent Dibru-Saikhowa National Park.

Already two officials of OIL have been suspended for alleged negligence of duty at the gas well site, while a show-cause notice has been to John Energy Pvt Ltd, the outsourced private operator of the well.

A case has also been registered against Oil India and John Energy over the incident.