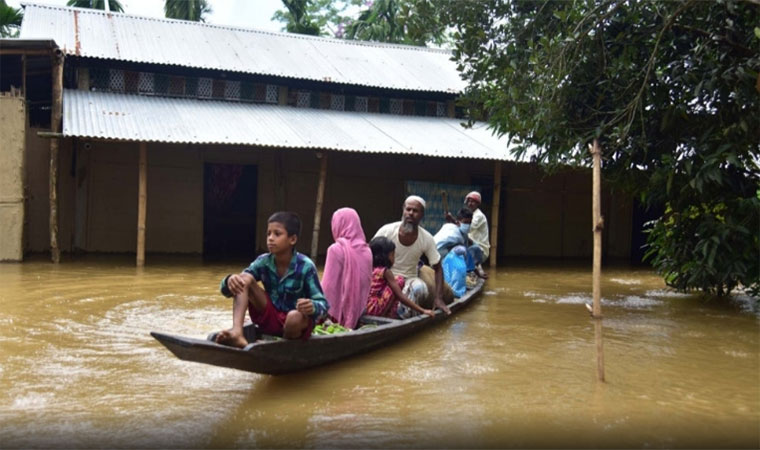 Saturday, July 11: Parts of Assam are set to be lashed with heavy rains once again over the weekend, with isolated extremely heavy falls also expected across the state. In view of these predicted conditions, the entire northeastern state remains under a red warning on Saturday and Sunday.

According to the India Meteorological Department (IMD), the westerly winds from the monsoon trough and the humid easterly winds blowing in from the Bay of Bengal have been converging over east and northeast India, thereby giving rise to unstable weather conditions over the region.

The instability is set to cause widespread monsoon showers across that part of the country, with Assam particularly likely to witness extremely heavy falls on Saturday, July 11. Therefore, the IMD has placed a red warning over the state this weekend, instructing the Assamese people to “take action” and protect themselves from the rough weather conditions.

Heavy showers also lashed Assam on Friday, July 10, as widespread precipitation, including some heavy showers, were observed at most places. This strong rainfall activity further worsened the flood situation in the state, inundating at least two more districts and affecting 1.70 lakh more people, reports The Times of India.

According to the Assam State Disaster Management Authority (ASDMA), 3,41,837 people of 32 revenue circles of 14 districts have now been affected by the deluge. Moreover, floods and landslides have, so far, claimed 64 lives in all—killing 40 in deluge and 24 in the collapse.

Now, owing to the likelihood of heavy to extremely heavy falls over the weekend, IMD’s regional met centre in Guwahati has placed a red warning over the districts of Dhubri, South Salmara Mankachar, Goalpara, Kokrajhar, Chirang, Baksa, Barpeta, Bongaigaon, and Karbi Anglong on Saturday. Come Sunday, only the likes of Dhubri, Baksa, Barpeta, and Bongaigaon will retain the red-level warning.

The district of Kamrup metro, which houses the state capital of Guwahati, will be on a yellow watch (“be updated”) due to the likelihood of isolated heavy rains and thundershowers on the weekend. The chances of rainfall over Guwahati remain at 80% on Saturday, and rise all the way to 100% on Sunday. The daytime mercury levels in the city will hover around the 29°C mark.

Since the beginning of June, Assam has recorded nearly excess rainfall worth 686 mm, which is 18% more than its long-term average of 580 mm for the period between June 1 and July 10.