The battle to prove who are the ‘original inhabitants’ of the region is contributing towards writing divisive histories.

History, in Assam, has always been at the forefront of political battles, especially when the problem of Assamese identity is at stake. Such debates often lead to controversial claims and counter-claims based on narratives about Assamese people and their history of settlement in the region. These battles over “authentic” histories, although not surprising, continue to draw journalists, historians, public intellectuals and politicians into acrimonious debate.

The claims made by a memorandum published by the Assam chapter of the Jamiat Ulema-I-Hind in October stirred up a hornets’ nest. The Jamiat memorandum, based on Abdul Muhib Majumdar’s book, Down the Memory Lane, argues that the Muslims who are believed to have migrated to Assam from present-day Bangladesh are indigenous to the land. In proposing this “theory”, the memorandum does not take into account the claims to distinctiveness of Barak Valley from the history of Brahmaputra Valley.

Moreover, the memorandum explains that most groups popularly identified as indigenous are actually “migrants” from various parts of the Indian subcontinent, who came and settled in the region in the course of history. They further believe Mongolian and Tibeto-Burman aggression “drove out” the “Dravidian inhabitants” of the region, who moved to neighbouring regions in Bengal. According to the Jamiat, these people came back when the British colonial officers in the late 19th and early 20th centuries brought men from Mymensingh and Sylhet region in erstwhile East Bengal to clear lands and make them cultivable. Thus, the people were now restored to their “homes”.

The Jamiat claims that the Muslims in question must be protected according to the Clause 6 of Assam Accord. The clause states the government would introduce measures to safeguard the culture and language of the Assamese people but, 35 years later, it is yet to be implemented. Demonstrators at a protest against the new citizenship law in Guwahati on December 20. Credit: Biju Boro/AFP

This year, Clause 6 came back into discussion after the Modi government tasked a committee with its implementation. Last week, as Assam raged in protests against the Citizenship Act, Prime Minister Narendra Modi referred to the clause, saying his government was committed to implementing it.

But there is an important question that needs to be resolved before the clause can be implemented: Who is Assamese? Whose culture needs to be protected and against whom?

The recent Jamiat claim needs to be seen against the backdrop of this debate, which emerged with the process of updating the National Register for Citizenship starting 2015. The claim, which is being presented as a “theory”, has ruffled many feathers. Assamese historians have rightfully debunked it as ‘absurd’ and Assamese Muslim organisations have more or less rejected it as baseless.

Now, certainly the Jamiat Ulema-I-Hind’s claim or “theory”, as it is being called, has no basis in history whatsoever. There is no material evidence to support their claim. But what about the detractors? When they refute the Jamiat claim and make counter-claims about indigeneity, are they being proximate to historical truth, leave aside correctness? In the process of refuting, what kinds of argument are given a new lease of life? And what is it doing to the political imagination of “being Assamese” or possessing Assamese-ness?

It is often said that contemporary Assam consists of two distinct cultural zones – the Brahmaputra Valley and the Barak Valley. The view that the two regions don’t have shared history or culture has been highlighted by several historians writing on Modern Assam. This viewpoint when taken to its extreme is reflective of a deep-seated bias against Barak Valley at best or an ignorance about the history of the region at worst.

Such ideas can only emerge from colonial interpretation of precolonial pasts. And we have long carried the burden of such ideas with us. The binaries of Barak versus Brahmaputra, Bongal versus Axomiya (Asamiya), Axamiya versus Jongolia (pejorative for men from forests and hills), Axamiya verus Bagania (pejorative for Adivasis comprising the labor force in the tea gardens ) often form the bedrock of such histories.

Apart from Indrani Chatterjee’s monograph, Forgotten Friends: Monks, Marriages and Memories of Northeast India and Dolly Kikon’s ethnographic account of everyday lives in militarised frontiers, Living With Oil and Coal: Resource politics and militarization in northeast India, no other book on the region in recent years has tried at challenging such hardline ideas. The lack of scholarship is partially the reason why we are still stuck with a question that painstakingly probes the problem of “origin”. A protest against the Citizenship Amendment Bill in Guwahati on December 5. Credit: Anuwar Hazarika/Reuters

The frantic search for who ‘came first’ and using it as a benchmark to mark out ‘others’ is a failed project and can only lead to histories that divide and sever people from their land, rivers and forests and thrust them into uneasy camps – Bongal, Bangladeshi, Jongolia, Bagania etc. Such projects say nothing about everyday conflicts and relationships that emerge out of interactions between neighboring groups of people – for example, the Nagas, Ahoms, Assamese and Adivasis residing in the foothills of Assam-Nagaland border of whom Dolly Kikon writes in Living With Oil and Coal. And, if one were to look for the intellectual foundation of the NRC process, one can find it in the literature that asserts the role of the ‘foreigner’ to a group of people who are to be ‘excluded’ in order to build a ‘pure’ homogeneous cultural identity. The logic as one can easily detect is outrightly racist and at odds with the historical record.

The historical record
Historians and scholars who refute the Jamiat ‘theory’ but at the same time foreground an idea of Axamiya exclusivity iterated through the language of the khilonjiā – or the sons of the soil – are only replacing one biased narrative with another. Epigraphic records, one of the most reliable sources for studying early medieval Assam, neither suggest the presence of a Dravidian population in the region nor provide any evidence for the region to be well integrated into the Brahmanical cultural complex by 900-1000 CE.

Historian Nayanjot Lahiri and Religionist Paolo Rosati (commenting on the 1100-1200 CE) argue that Brahminisation of rituals, mostly importantly kingly rites and courtly practices, were in full swing during the time of the Kamarupa Pala kings. However, as Rosati shows, in most cases this was achieved through a process of co-mingling of local ideas and practices along with ideas that came by way of Brahmanical texts, most importantly the Puranic tradition. Rosati’s thesis of multicultural kingship highlights the importance to probe ways in which traces of the local remain alive in otherwise cosmopolitan ideas and practices.

If we were to look at the latter-day courtly prose chronicles, called buranjis which were written in the medieval register of Assamese, we will find the Assamese argument about ‘original inhabitants’ crumbling in an instant. Most of these prose chronicles suggest, that before the migrations of the Ahom groups into Brahmaputra Valley, these regions were ruled by the Kacharis, the Sutiyas and the Bodos.

The Ahom migrations took place over the 13-14th centuries and later, when new groups came into the region and staked their claim on the land, river and forests. This, however, came at significant cost. Most of these chronicles record tremendous violence through which Ahom supremacy was established over groups like Sutiyas, Kacharis and much later the Koch. In fact, the ruins of the medieval Sutiya kingdom in present day Sadiya still bear the mark of inexplicable violence. Sadiya, one of the important centres of political power in medieval Brahmaputra Valley, was reduced to a frontier outpost under the governance of sadiyakhowa gohains or tax collecting officers-in-charge of Sadiya under the Ahoms. 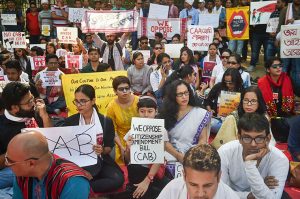 Very few historians of Assam have looked at “Ahom history” from the perspective of Sadiya kingdom and its inhabitants. We need to decentre “Ahom history” (or even “Tai-Ahom”) and look at the narratives of people who continuously resisted the political and cultural domination of the Ahom rulers. Only then can we begin to challenge the biases that shape contemporary claims about being “original inhabitants”.

Speaking of precolonial spatial configurations, philosopher and Africanist Achille Mbembe writes, “Movement was the driving force of the production of space and movement itself, if we are to belief some of those cosmogonies.” In proposing the utopian idea of a borderless world, Mbembe explores movement as a practice that mattered most and continues to do so with respect to exercising control over a population, a group, a people and their persistent ways of transgressing heavy-handed grips of regulations.

The political culture of precolonial northeast India was shaped by movements of disparate groups of people who escaped their present conditions of oppression and looked towards a livable future. The names by which we know such movements are varied – Ahom migrations, Tai-Ahom migrations, Singpho migration and so on. But, the fact remains, people moved across vast geographies and created political conditions that helped them survive. As Mbembe suggests, to stop moving would mean to cease to live. That is what history teaches us, in North East India, South East Asia, the African continent and elsewhere.

The fact that a certain group of nationalist historians and intellectuals in Assam are in denial of this simple historical truth tells a lot about the ways in which history is used to support contemporary political biases. While it is ludicrous to propose a theory without any credible and verifiable evidence as in the case of the Jamiat memorandum, it is equally ridiculous to exclude a group or people from history and turn a blind eye to their contribution towards the making of a composite Assamese culture. A protest against the Citizenship Act in Guwahati on December 15. Credit: Sajjad Hussain/AFP

Assamese-ness, if we were to use it as a concept, must find its core in the perfected form of a composite culture described so aptly as “xamanyay xanxkriti’” by the 20th-century Assamese intellectual, Jyotiprasad Agarwala. In other words, we need an idea of Assamese cultural identity where people from the hills, foothills, and plains coexist with their distinctive histories and cultures being recognised as such. Such an identity must acknowledge the fraternal bonds between Assamese and other languages of the Brahmaputra Valley, Miya, Sadri, Bodo, Nagamese, to name a few. Agarwala’s proposition (in a political speech delivered in 1941) of an inclusive cultural identity can provide an entry point towards rethinking what it means to be Assamese, especially in current times. Now, more than ever before, we need a capacious understanding of Assamese cultural identity while recognising the rights of indigenous people to language, resources and history.

One should stop digging the past in order to produce evidence for exclusion because it is bound to be mediated by deep-seated political biases. We should let the past speak for itself. Even if it is a truth that challenges all that we have learned so far. The Jamiat Ulema-I-Hind, a section of Assamese historians and Muslim organisations of the valley are harboring faulty ideas to this extent. Their battle to prove the “original inhabitants” of the region is contributing towards writing divisive histories. And in this project, history is being continuously called to play the role of the misguided judge.

The crisis definitely lies in the way in which history is being read and told to people. But, most importantly, there is an attempt to prioritise one people over another and suppress the voice of the other. It is a dangerous practice, although not new, that needs to stop.