An initiative titled SAMPARKA (Software Application for Migrated people to Assam for Rejuvenating Karma Abhiyan) to systematically capture data of migrant workers who returned to Assam in view of coronavirus induced lockdown is also developed. The software will collect data on various parameters and share the same with Government departments for further action and drafting policies 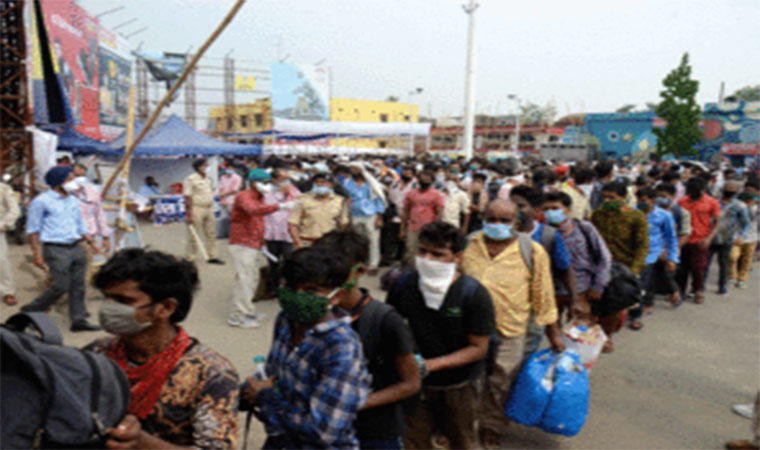 GUWAHATI: Assam is developing software to collect the data of migrant returnees, who came to the state following the COVID-19 pandemic.

An initiative titled SAMPARKA (Software Application for Migrated people to Assam for Rejuvenating Karma Abhiyan) to systematically capture data of migrant workers who returned to Assam in view of coronavirus induced lockdown is also developed. The software will collect data on various parameters and share the same with Government departments for further action and drafting policies

Assam Chief Minister Sarbananda Sonowal urged the Panchayat & Rural Development Department (P&RD) to maintain utmost transparency and accountability while implementing developmental schemes to usher in good governance. Sonowal also directed the Department to evaluate the gaon panchayats on the basis of their performance and develop a rating system for the GPs.

While reviewing progress of schemes implemented by the P&RD Department, the Chief Minister further asked to fix responsibility on GP presidents, secretaries and chief executive officers of zila parishad for their performance and issue show-cause notice to those who perform poorly in the assessment indices.

Calling for strict monitoring of schemes for fair utilization of funds, the Chief Minister directed the department to constitute a cell to monitor public complaints or graft charges that appear in print and electronic media against the rural development schemes. The cell would further take feedback from officials against whom allegations have been made to ascertain the veracity and initiate timely action against the erring officials, the Chief Minister said.

Stating the need for timely completion of schemes, Chief Minister Sonowal emphasised on the need for day-today collection of status report and instructed the department to develop a system for effective monitoring.

Moreover saying that there are vast opportunities available in the villages for income generation, the Chief Minister asked the department to constitute a cell to carry out micro level study of the markets to explore economic opportunities. He said that such an endeavour would help in establishing better linkages between the market and the produces by the villagers.

He also called for showing more dignity to the workers engaged in implementation of various schemes of the department and directed to provide identity cards to the MGNREGA workers. Sonowal also suggested increasing the participation of women in rural development schemes in the State.

The P&RD officials informed the Chief Minister that as many as 48.35 lakh people were provided Job Cards in Assam and out of this around 42.17 % are female workers. They said that during the coronavirus induced nationwide lockdown, over 11,000 SHGs produced 68.68 lakh masks and more than 52.22 lakh masks were sold for Rs. 11.87 crore. Besides, more than 79,000 SHG members earned 8.15 crore by selling vegetables, fruits, milk, egg, poultry meat and fish during lockdown.

The officials also informed that four initiatives namely Amar Gaon Amar Arthaniti, Amar Mati Amar Kheti, Amar Pukhuri Amar Maas and Mukhya Mantrir Divyangjan Atma Nirvar Achani are proposed to be taken up under MGNREGA in convergence with ASLRM and other departments. They said that these initiatives will help in creating sustainable assets for enhancing livelihood security directly linked to agriculture, horticulture, sericulture, fishery and livestock.