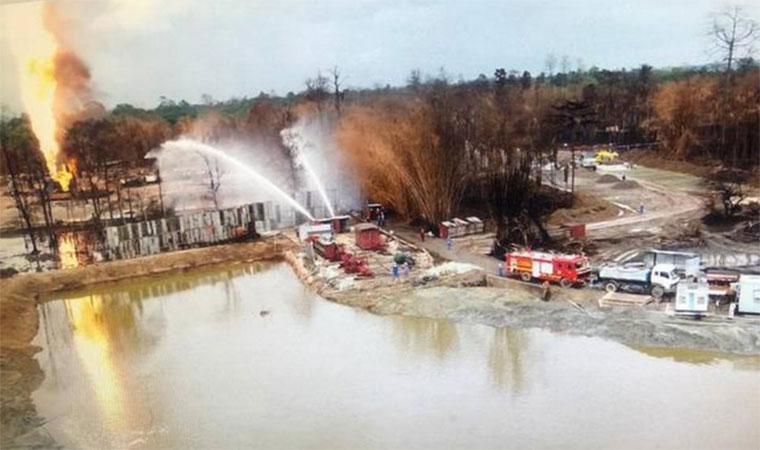 The rising level of the river from where water is being drawn could hamper the fight the tame the blaze and the blowout at one of Oil India Limited’s (OIL) natural gas wells in eastern Assam’s Tinsukia district, officials said on Wednesday.

Fire-fighters had on Tuesday evening begun shooting jets of water drawn from the Dangori river through heat shields after the Indian Army completed the construction of a composite bridge at the blowout site in Baghjan.

The bridge was extremely critical for controlling the fire, a defence spokesperson said. Well Number 5 had burst into flames less than a fortnight after the well had a blowout — uncontrolled escape of gas at great speed — on May 27.

“The water of the Dangori river is rising rapidly with large swathes of eastern Assam experiencing floods. This could hamper our operations,” an OIL spokesperson said from the exploration major’s headquarters in Duliajan in the adjoining Dibrugarh district.

Biomaterial for sludge
On the brighter side, The Energy and Resources Institute (TERI) has mass-produced biomaterial to treat the sludge in wetlands around the blowout well.

“After a study on the bioremediation of sludge at the site, TERI is dispatching a truckload of microbes from their facility. The truck is expected to reach the site by July 5 to start the process of restoring the landscape,” the spokesperson said.

The blowout well is close to the Maguri-Motapung wetland, which is within the eco-sensitive zone of the Dibru-Saikhowa National Park.

Petroleum and Natural Gas Secretary Tarun Kapoor had on Tuesday visited the blowout site as well as the relief camps set up for the affected people. He also met disaster control experts from Singapore, United States and Canada as well as of OIL and Oil and Natural Gas Corporation Limited to understand the plan for capping the well.

Meanwhile, the movement of men and material to Baghjan was affected due to a shutdown in parts of Tinsukia district on Wednesday. Blockades of crude oil and natural gas extraction sites by some local groups continued, resulting in a cumulative loss of production for OIL.

Officials said they had lost 8,394 metric tonnes of crude oil and 10.7 million metric standard cubic metres of natural gas since May 27 due to shutdowns and blockades.