Agencies say that the epicentre of the earthquake felt in Assam and neighbouring states on Sunday was in Mizoram’s Aizawl district. 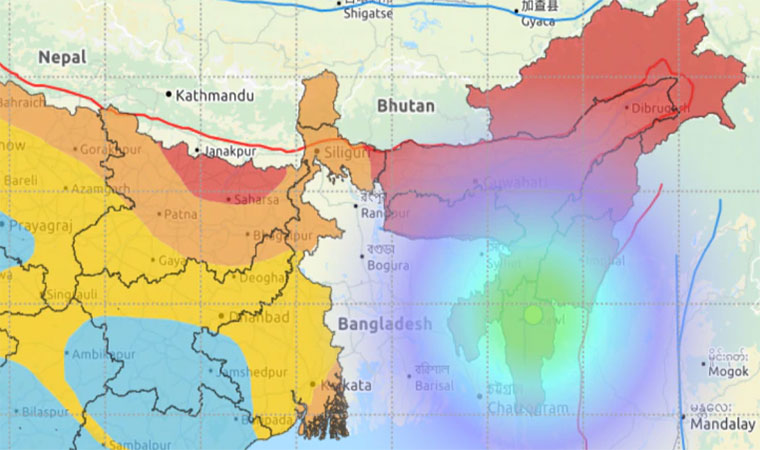 Residents of Guwahati in Assam and other parts of the state along with those in the neighbouring states of Meghalaya, Manipur and Mizoram reported feeling tremors at around 4.16 PM on Sunday.

Agencies say that an earthquake of magnitude 5.1 was recorded in the region on June 21 with the epicentre being in Mizoram’s Aizawl district.

The National Center for Seismology (NCS) has marked this earthquake as ‘reviewed’ while confirming that the epicentre was 25 km east northeast (ENE) of Aizawl in Mizoram. The depth of the quake was 35 km while the coordinates of the epicentre are 23.80 (latitude) and 92.26 (longitude).

The Earth Science Department of Manipur University said that a 5.1 quake hit Manipur at 4:16 PM with the epicentre 9 km from Ngopa area in Mizoram.

No loss of life or damage to property has been reported in Manipur so far, the DGP Control Room told a news agency.

On June 18, a medium intensity quake pegged at a magnitude of 5 rocked northeastern states. In a statement, the Regional Seismic Centre said that the tremor was tracked at a depth of 80 km from the earth’s surface with the epicentre in Mizoram’s Champai district. The earthquake was felt in Shillong and all major cities in the northeast.

Earlier this month, as many as 18 aftershocks and two minor quakes were experienced in Gujarat’s Kutch district within 72 hours of an earthquake of magnitude 5.3 that occurred on June 14. The Institute of Seismological Research (ISR) had confirmed that the intensity of the two quakes was 4.6 and 4.1 respectively while that of the aftershocks ranged from 3.7 to 1.9.