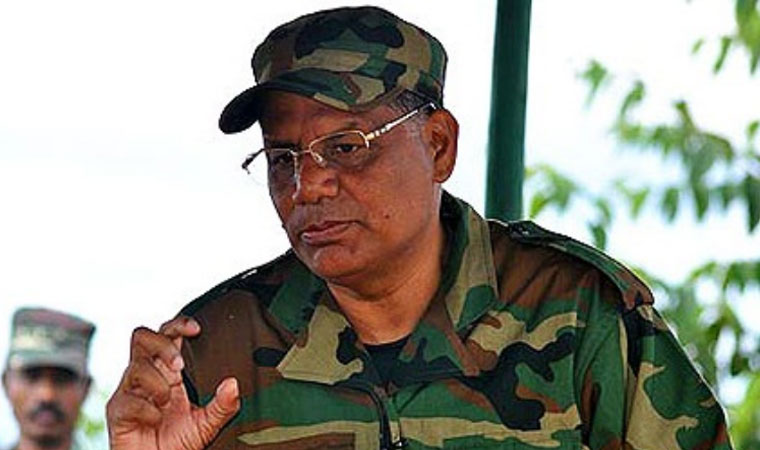 FACING THE MUSIC: With Myanmar Army cracking the whip, the Paresh Baruah-led ULFA-I is facing the heat. File Image

ULFA commander-in-chief Paresh Barua will return to Assam and sign a peace agreement with New Delhi to bring an end to the 41-year old armed movement, the Outlook has reported.

Quoting multiple sources, the report said the peace accord with ULFA would be Narendra Modi-led government’s “Rongali Bihu gift” to the people of Assam.

Rongali Bihu is celebrated mid-April, and it marks the beginning of the Assamese New Year.

Since April 1979, the ULFA has been fighting for Sunor Axom (a Golden Assam), a sovereign homeland for the indigenous people of Assam.

But, Paresh Baruah has always been against political negotiations with New Delhi, and had earlier set three pre-conditions for talks.

The ULFA (I) faction led by Paresh Baruah also detonated serial blasts in Upper Assam on the 71st Republic Day.

The elusive ULFA commander-in-chief has always been demanding that talks would be possible only if the issue of “sovereignty of Assam” is included in the agenda.

The ULFA leader always insisted that the venue of talks should be in a third country and that too, under the supervision of representatives of the United Nations.

If the report by Outlook is to be believed, it is surprising as to how Rebati Phukan managed to convince Paresh Baruah to drop all the three pre-conditions for peace talks.

Rebati Phukan, a former state team footballer, had mysteriously disappeared on April 22, 2018 from his Ambikagiri Nagar house in Guwahati.

Earlier, Rebati Phukan was part of the People’s Consultative Group (PCG), which was constituted to broker peace with ULFA.

The PCG held three rounds of talks with New Delhi, and the first meeting on October 26, 2005 was attended by Manmohan Singh.

Quoting Home Ministry officials, the Outlook report claimed talks with ULFA is in final stage and most issues, including granting constitutional safeguard to Assam’s indigenous people, have been resolved.

And before the signing of the peace accord with ULFA, New Delhi is also likely to finalise the definition of “Assamese”.

Even Assam Health minister Himanta Biswa Sarma announced on Tuesday in Guwahati that the issue of constitutional safeguard of the indigenous Assamese people would be announced before the Rongali Bihu.

The committee, which is looking into the Clause 6 of Assam Accord, is likely to submit its report to the Centre by mid-February.

As per New Delhi’s promise, the indigenous people of Assam would be eligible for “constitutional safeguards” under the Clause 6 of the Assam Accord.

Himanta Biswa Sarma, on behalf of Assam government had also offered the olive branch to Paresh Baruah to come forward to resolve his demands politically.

Meanwhile, another ULFA faction, led by the Arabinda Rajkhowa and Anup Chetia are engaged in peace talks with New Delhi since 2010.

Rajkhowa and Chetia are optimistic to sign a peace agreement with New Delhi soon.

Is New Delhi trying to include Paresh Baruah also within the ambit of the peace process?