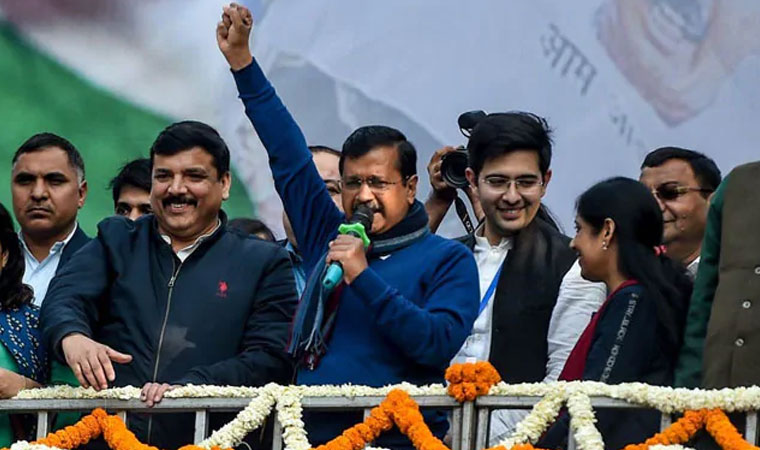 New Delhi: Arvind Kejriwal, jubilant after a huge victory in Delhi, today began his thank-you speech with a declaration: “Dilliwalon, ghazab kar diya aapne (You have done the impossible). I love you.”
The Aam Aadmi Party (AAP) leader said the victory marked a new kind of politics, that of “work”. He also called it a “win for Bharat Mata (mother India)”.

Mr Kejriwal’s credits also included Lord Hanuman. “Today is Tuesday, the day of Hanuman-ji. Hanuman-ji has showered Delhi with blessings. Thank you, Hanuman-ji,” said the Delhi Chief Minister, whose recitation of Hanuman Chalisa during the poll campaign caused a flutter and provoked BJP allegations that he was resorting to Hindutva to win.

AAP is set to sweep the Delhi election, with 63 seats in the 70-member assembly. The BJP is at seven seats and the Congress, zero.

Overjoyed by its outsized victory, the party celebrated with blue and white balloons and holi colours at its headquarters in Delhi. There were also slogans of “Bharat Mata ki Jai(Hail mother India)”, not commonly heard in AAP gatherings.

For Mr Kejriwal, it was a double celebration as it was also his wife Sunita Kejriwal’s birthday.

“This is not my victory. This is a victory for Delhi, for all the families who saw me as their son. For every family that got 24-hour electricity, water and education. The people of Delhi has given us a new kind of politics, the politics of kaam (work),” Mr Kejriwal, 48, said.

The former taxman-turned-activist-turned politician will become Chief Minister for the third straight time.